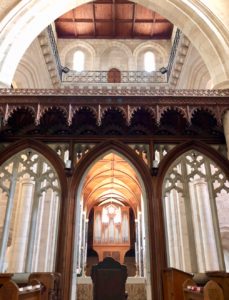 A Special Evensong was held for those attending GAFCON this afternoon

This week sees the convening of the Third Global Anglican Futures Conference which for the second time is being held in Jerusalem ten years after the first such assembly.

It will be the largest to date, with about 2000 participants. The first GAFCON took place in the context of a boycott of the Lambeth Conference held the same Summer and accordingly highlighted episcopal participation.

(The full text can be read at

The doctrine of the Church of England is grounded in the Holy Scriptures, and in such teachings of the ancient Fathers and Councils of the Church as are agreeable to the said Scriptures. In particular such doctrine is to be found in the Thirty-nine Articles of Religion, the Book of Common Prayer and the Ordinal.

For a movement and organization that has occasioned so much comment and excitement, some might register a degree of surprise at the seeming modesty and straightforwardness of the goals for those attending,  which have been set out in terms of their being encouraged, inspired and excited to take forward and broaden the work of the Gospel.

And this will take concrete expression in the launch or re-launch of nine Global Networks:

There will doubtless be a new Statement also issued this week.

Aside from extensive prayer, praise music and Bible study and the morning Eucharists,  there will be Plenary presentations and a wide range of seminars and panels on subjects ranging from an overview of African Traditional Religion, the Prosperity Gospel, Secularism, The Uniqueness of Christ, the Perspicuity of Scripture, Engaging Islam and Buddhism; Marriage, love and Intimacy; the Culture of Death, and Discipleship; through to Apologetics; Justification and Assurance, the Nature of Hell; engaging Traditional Religion; Children and Youth; Women in Ministry;  Same Sex Attraction; the Work of the Spirit; Church Discipline, Gender and Identity; the Post-Catholic Context; the Post-Protestant Context; Empowering the laity, and the Sacraments in Christian Life.

There will also be regional dinners and events and an afternoon for tours.

For “GAFCON explained in 5 minutes”  there is a video by The Most Revd. Peter Jensen, the retired Archbishop of Sydney and GAFCON General Secretary at

The Archbishop of Canterbury spoke at events in Nairobi Cathedral just before the 2nd GAFCON Assembly there and upon being questioned about  the Jerusalem meeting by  Susie Leafe, former Director of Reform, at the Church of England’s most recent General Synod gave the following affirmation :

We strongly agree with the view of the Panel that international relationships contribute to the development of discipleship and mission:

I am personally pleased that every diocese has some link to Anglican Provinces across the world, and we are keen to continue developing these relationships. The recent Primates Meeting underlined the importance of such relationships. I have had conversations with, and listened to, the views of those planning to attend the Gafcon conference, and am keen to increase attendance at any event that encourages the flourishing of the whole Anglican Communion.