Toon Memorial Lecture 2018 Given in Oxford on 17th May 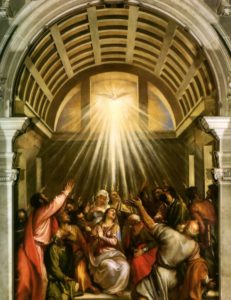 Titian: The Coming of the Holy Spirit, The Church of Santa Maria della Salute, Venice, c. 1545

The Society sends warm greetings to all

for this Season of Whitsuntide !

We also wish to record that:

The Toon Memorial Lecture for 2018
was given under the title

Elephants and Anglicans
to the sound of Church Bells:
Just how central is the place of the Prayer Book
for Anglicans and the future of the Communion?

By
The Revd. Canon

Alistair Macdonald-Radcliff
at
Pusey House Oxford on
Thursday 17th May

after Evensong,  which was led by

and at which the preacher was
The Revd Dr Daniel Newman

An Analytical Summary of the Lecture:

Anthropocentric triumphalism is a problematic but framing context for us as Anglicans today — with three layers of paradox:

So it may be time to learn some some lessons from more heroic times in the past….. (two illustrations were cited)  followed by an opening review of the initial conclusions of Archbishop of Justin Welby after he first took office and had made initial visits to all the Provinces in the Communion:

The Communion may be in travail but that this is not synonymous with demise since it is flourishing in may practical ways….

His several understandings of “Communion”: from phenomenon to eschaton.. to practical:but also
— its fullness involves a visible unity that is currently and perhaps increasingly elusive
— whatever else changes the Archbishop of Canterbury will remain.

Some hard realities:
Full Communion is currently significantly broken in terms of
the Eucharist and potentially between  Provinces and in terms of full participation in the instruments of Communion
Notably at the level of the Primates,  literal Communion seems to have gone
And sadly that the Archbishop’s Convening power in regard to Lambeth Conference may still be in some jeopardy (Even though it looks more promising than it did in 2008, for 2020, but it remains unclear as yet  and full participation by all – notably the global south is vital).

An old question returns to centre stage:
Does Anglicanism have a sufficiently coherent understanding of authority to ensure cohesion as a fellowship of churches (NB the plural there) ?

But whither a “Disrupted Communion” in the meantime?

The Welbyite approach emphasizes being Christian rather than merely Anglican,
as does emphasis on Baptism,  but such approaches are short of the fulness of koinonia appropriate to a Church qua Church

Various understandings of authority: as dispersed, internal and external authority, leaving the enduring challenge for Anglicans as to how it can be exercised such as to be adequate to ground doctrine

The further potential of the Koinonia concept

Archbishop George Carey: on rise of the the Anglican Communion presenting itself as one Church in Ecumenical dialogue
Archbishop Robert Runcie while Archbishop:  argued that only greater interdependence can prevent fragmentation of the Communion
(Archbishop Rowan Williams also made reference to the many varieties of Anglicanism.)

The interesting and significant early history of the Lambeth Conference:

First called for, in 19thC.,  by North Americans wanting action about theological controversy in South Africa
The subsequent rise of its authority followed in recent decades by attempts to scale this back by some who argue it has “only” moral authority and not any legal or jurisdictional role with renewed emphasis by some on Provincial autonomy

Leaving a tension with the concept that the Communion is a global church so perhaps it needs to step back from that.

The need to recover the Anglican self-understanding of how it carries forward its theological heritage:
–which is multi-sourced in Scripture, Creeds and its historic Prayer Books and Formularies. This may seem complex but is truer to the manifest history of the church through time,  than seemingly neater alternatives and is very much NOT an opening for “anything goes” Anglicanism. An illustrative example in the thought or Paul Avis.

Hence we must be true to the Anglican Way of doing theology ‘within the sound of Church Bells’ while resisting the peril of those who in the story from East, lacking sight defined an elephant rather strangely because they limited themselves only to what they could feel…..

NB: This lecture will be published
but in the meantime it is also hoped to give this lecture in a fuller form
for further discussion in America later this year.

Further details will be announced shortly.